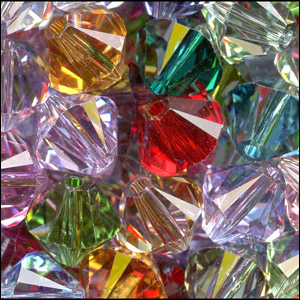 Hello Swarovski crystals! Let’s chat about some facts surrounding their magic and appeal.

Did you know that Swarovski Crystal is the world’s highest quality crystal? Swarovski is sold in 160 countries! They are manufactured in 7 countries including the US. Swarovski is an Austrian producer of glass headquartered in Wattens, Austria, and is a family-owned business since it was founded in 1895 by Daniel Swarovski. The company has 3 major industry areas: the Swarovski Crystal Business, that primarily produces lead glass (branded crystal) jewelry and accessories; Swarovski Opti, which produces optical instruments such as telescopes, telescopic sights for rifles, and binoculars; and Tyrolit, a manufacturer of grinding, sawing, drilling, and dressing tools, as well as a supplier of machines.

As of 2018, the Swarovski Crystal Business is one of the highest-grossing business units within Swarovski, with a global reach of approximately 3,000 stores in 170 countries, more than 29,000 employees, and a revenue of about 2.7 billion euros.
All Swarovski crystal produced since 2012 has been lead-free. While Swarovski is now run by the fifth generation of family members, Daniel Swarovski was born in northern Bohemia (now the Czech Republic), 20 km from the current border with Poland. His father was a glass cutter and owned a small glass factory. It was there that the young Swarovski served an apprenticeship, becoming skilled in the art of glass-cutting. In 1892 he patented an electric cutting machine that facilitated the production of crystal glass.

In 1895, Swarovski, financier Armand Kosmann, and Franz Weis founded the Swarovski ‘company’ and the name was later changed to the KS & Co. The company established a crystal-cutting factory in Wattens, Tyrol (Austria), to take advantage of local hydroelectricity for the energy-intensive grinding processes Daniel Swarovski had patented. Swarovski’s vision was to make “a diamond for everyone” by making crystals affordable.

In 1977, Swarovski entered the jeweler market in the United States. Nadja Swarovski, the founder’s great-great-granddaughter, became the first female member of the Swarovski executive board in 2012. She is the 5th generation leader.
Swarovski Crystal products range from glass sculptures and miniature, jewelry and rhinestones, home decor, and magnificent chandeliers. All sculptures are marked with a special logo. The original edelweiss flower Swarovski logo was replaced by the swan logo in 1988.

How do you make these crystals? They are handmade. Crystal glass is produced by melting a mixture of quartz sand, potash, and soda at high temperatures. To create crystal glass that lets light refract in a rainbow spectrum, Swarovski coats some of its products with special metallic chemical coatings. This process creates different finishes. Some are commonly known as Aurora Borealis, or “AB”, that gives the surface a rainbow appearance. Other coatings are named by the company, including Crystal Transmission, Volcano, Aurum, Shimmer, and Dorado. Coatings may be applied to only part of an object; others are coated twice, and thus are designated AB 2X, Dorado 2X, etc. These coatings elevate the price of the crystals. In 2004 Swarovski released a new design Xilion, a copyrighted cut designed to optimize the brilliance of Roses (components with flat backs).

Swarovski’s are no stranger to Hollywood. They have been featured in many movies and live theater productions. All the jewelry from Gentlemen Prefer Blondes starring Marilyn Monroe were Swarovski crystal. Additionally, the tiara worn by Audrey Hepburn in Breakfast at Tiffany’s was adorned in Swarovski crystal. Since 2004, Swarovski has provided the 9-foot-diameter (2.7 m), 550-pound star or snowflake that tops the Rockefeller Centre Christmas Tree in New York City. Smaller versions of this are sold as Annual Edition ornaments. They have an online store and can be found in 3000 retail stores around the world.

They are also huge stewards of the community and watershed programs including 500,000 children and their families. The Swarovski Foundation was set up in 2013 to honor the philanthropic spirit of Daniel Swarovski. It works to support culture and creativity and promote human empowerment and conserve natural resources for positive social impact.

Recently I entered an international design competition by Swarovski. I entered a set made from pearls and one color of Swarovski crystals. To be sure, thousands of entries will be received and judged, stay tuned for any updates.
In 2008, while working for a Fortune 50 company, I was a top performer, ranking 8th in the world. One of my many rewards for that achievement was a magnificent Swarovski solid crystal paperweight and a pave pendant of none other than their signature swan! A treasured gift.

The core elements of my unique designs 90% of the time is a mixture of pearls and Swarovski crystals. This pairing is what I am drawn to as these 2 components complement each other’s beauty. Here are some Swarovski colors you may find interesting: Pacific Opal, Blue Zircon and AB, Scarlett, Amethyst, Sapphire, Indian Pink, and mixed.

Hope you enjoyed this session.