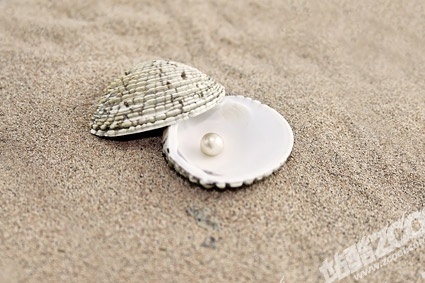 Greetings –
Pearls are one of life’s little pleasures… They are the birthstone for June. They are highly associated with love, royalty and weddings. Pearls adorn faces, hands, necks, wrists, clothing, and crowns of many of you. Pearls have a long history and they are said to have originated about 2300 BC when Pearls were presented as gifts to Chinese royalty. In ancient Rome, pearl jewelry was considered the ultimate status symbol. According to legend, Cleopatra crushed a pearl into a glass of wine to prove to Marc Antony that she could give the most expensive dinner in history.

Pearls get their start as intruders. Usually by a tiny irritant that has made its way inside the shell of a live mollusk (aka oysters). Whether it is manmade or naturally occurring this irritant is rejected but the mollusk is unable to expel it so therefor it creates a coating around it call a mantle which develops into nacre. This nacre grows over years and can produce the loveliest of pearls. Most pearls today are farmed this way. Principal oyster beds lay in the Persian Gulf, along the coasts of India and Ceylon (now Sri Lanka), and in the Red Sea. Chinese pearls came mainly from freshwater rivers and ponds, whereas Japanese pearls were found near the coast in saltwater.

Despite the common misperception, Mikimoto did not discover the process of pearl culture. The accepted process of pearl culture was developed by the British Biologist William Saville-Kent in Australia and brought to Japan by Tokichi Nishikawa and Tatsuhei Mise. Nishikawa was granted the patent in 1916, and married the daughter of Mikimoto. Mikimoto was able to use Nishikawa’s technology. After the patent was granted in 1916, the technology was immediately commercially applied to Akoya pearl oysters in Japan. Mise’s brother was the first to produce a commercial crop of pearls in the Akoya oyster. Mitsubishi’s Baron Iwasaki immediately applied the technology to the south sea pearl oyster in 1917 in the Philippines, and later in Buton, and Palau. Mitsubishi was the first to produce a cultured south sea pearl – although it was not until 1928 that the first small commercial crop of pearls was successfully produced.

Whether wild or cultured, gem-quality pearls are almost always nacreous and iridescent, like the interior of the shell that produces them. However, almost all species of shelled mollusks are capable of producing pearls (technically “calcareous concretions”) of lesser shine or less spherical shape. Although these may also be legitimately referred to as “pearls” by gemological labs and also under U.S. Federal Trade Commission rules,[4] and are formed in the same way, most of them have no value except as curiosities and decorative.

There are many different kinds of pearls Tahitian, Coin, Akoya, Keizai, South Sea, Mabe are some to be admired. Most pearls used for earrings fall in the 6-9 mm range as a point of reference for you.
SHOW JEWELRY

There are 7 very important indicators of qualities in pearls – All of near equal importance.

It was easy to see that pearls would be the focus of my new business. Freshwater, cultured, and glass pearls – I pair pearls with gemstones, metals, beads, and specifically Swarovski crystals which enhance the natural beauty of a pearl. My designs are one of a kind meaning no 2 are alike but some may be similar. I have been asked why do this? A business model of one of each design limits your inventory and ability to mass market your product. To me, this is what Carolina Pearl is all about. When a woman wears one of my designs, she owns it. It carries her brand, her spirit, and her individuality. There are some designs that are like others but there is always going to be a subtle difference. Some of the designs have landed with a few famous people and they have encouraged me to stay with it just like my friends and family.

Another thing in my repertoire is lampworking – That is when glass is melted under extreme heat, over a flame into one-of-a-kind beads. This is something I do not often get to do, as I do not have the gas and oxygen tanks required, the ventilation or a kiln. Last year I completed training to become a certified pearl specialist. This gave me certification from the Cultured Pearl Association of America – After around 4 weeks, there was a huge comprehensive exam and it was challenging at best. I learned so much and pass some of it on to my students.

Hope you enjoyed this session and learned something.